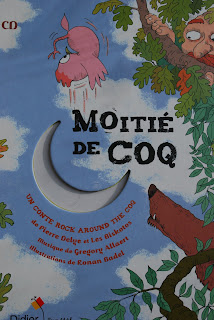 I am putting these photos up in case I get distracted by something shiny today and fail to actually write anything. Also, clearly I must prove the existence of Half a Cock to the doubters, who, very flatteringly, believe me capable of making it up.

First, here is the fox on its way into half a cock's arse. 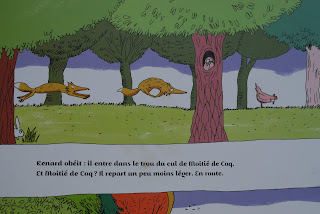 And here is half a cock afterwards: 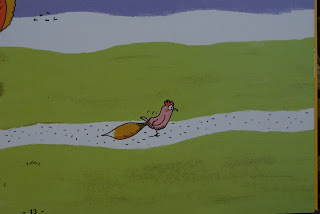 I feel I need to state that half a cock ASKS the fox to go up there. It's consensual, if you will.

Next, the wolf. If anything I find this even more sinister. 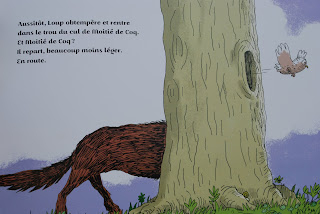 And here, finally, half a cock with everyone up his arse. 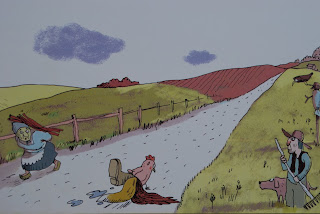 French and Belgian children's books are often rather fantastic. My previous favourite was "Monstres Chéris", a sort of monster family album. The father is called Papadamour, which totally makes him sounds like a Haitian dictator, and terrorises the family with an axe. Then there is Tante Andrée la Fumée who is just a curling ball of smoke. She gets dismembered too. Shall we have a couple of pictures of that? Oh, go on then. But I found a packet of triops food in the book and it gave me triops flashbacks, so you owe me.

Papadamour eating his yoghurt with an axe: 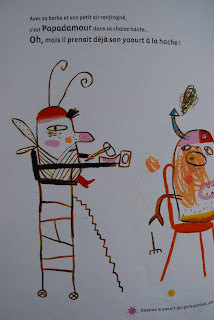 And cutting the mother monster's toe off when they first meet: 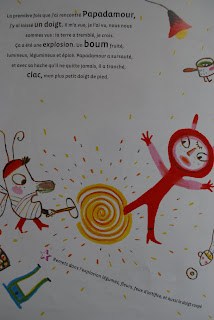 And Tante Andrée la Fumée (the book came with stickers, so the eyes, mouth and nose are additions. She was just a ball of smoke, which I sort of preferred, but apparently it's bad form to not allow your children to play with their sticker books, which I think is a CRYING SHAME): 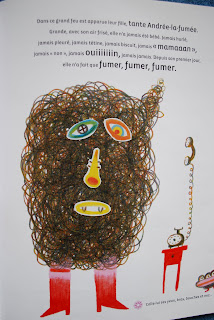 Then this is just a bonus picture that really belonged on yesterday's post, but I was far too busy trying to decide whether I still had a crush on Sinclair, even now his hair is slightly longer and he is a bit more gaunt.

[I do. He still has eyes like the snake in the Jungle Book and is so outrageously, erotically, rude. I would have a hard time choosing between him and André Manoukian who is still as magnificently demented. ] 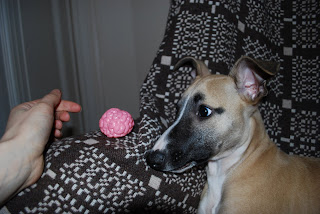 Here I am, trying to explain to Oscar why he is so STUPID. You can see he is trying hard to concentrate on the neuroscience but he still looks like Charlie from Casualty trying to emote about a sad sad death, probably of someone who only came in with a sprained finger.

Best start to a grey drizzly morning ever. This is my new favourite book and I must mail order a copy from Belgium instantly.

The instructions are even more bizarre in the Papadamour book. Also, can't see this Sinclair guy, just some pink logo. I MUST know what your new crush looks like.

Marie - the CD is icing on cake. I recommend wholeheartedly.

I am truly concerned now for the welfare of Lashes and Fingers, growing up in Belgium - Did I ever mention we once had to leave a hotel in Bruges in the middle of the night, for my husband couldn't sleep for the thoughts of all the terrifyingly Belgian puppets in every room, including one actually cycling across the ceiling in the breakfast room?

I know they have a tendency for the bizarre, but I am troubled by the book!

And as for Oscar, I do not see 'reproach', I see only endearing, and his dislodged brain!

The books merely confirm my suspicions that the Belgians are A Rum Lot and should be treated with due care.

And talking of Oscar's little pink plastic brain, I sent this link to Katyboo but I think you'd appreciate it too. It may just make you want to learn to knit so that you can make your own brain (Ms Boo and I want to): http://harbaugh.uoregon.edu/Brain/


wv is 'ringly' which I'm going to try and work into a conversation today...

That sure makes the books I read my son look tame.

Someone whacked sinclair with a light sabre?
The most risque books we have are Enid Blyton - yesterday's reading included some goblin smoking a pipe - horrors! Wouldn't be allowed in a library! t.x

Those books must cause a few nightmares? I agree Sinclair eyes are definately bedroom eyes!

I suspect the book will be impounded by customs if anyone tries to bring it into the UK.

Mrs Jones - I saw the link on Katyboo's blog a few minutes ago - they are awesome, though I also found myself wondering at the sanity of the person who knitted them.

My kids were looking over my shoulder as I viewed the illustrations for Half a Cock, and I must say they were riveted: "WHAT is going on there?" I can see the appeal to Lashes and Fingers, although the book is best not discussed in public.

Luckily Mister Castle is out at work today so can read this and practically VOMIT with laughter in peace! But I am AMAZED by Half a Cock. I cannot believe it. You're living in one long Dali painting. Or film by that guy who did Brazil (will look it up). And if he's got to get all that stuff up his arse, surely he should a WHOLE cock, not half a cock????

That book is truly weird. Do you think the title is a play on the English phrase 'half cock' as in going off at...?
What is it with the French and Belgians and bottoms?

Perfect. Will be acquiring these for the family bookshelf shortly.

I think, perhaps, I belong in Belgium. New Orleans is strange.... verrrrry strange, but Brussels seems to quantitatively out-bizarre it. Amazing. I am so jealous of the rooftop electric blue brain, the massive bunnies and now, the childrens' fiction. Stunning. Just stunning. And on top of all of that, Martin Margiela, Ann Demeulemeester and Dries Van Noten. Beautiful insanity.

I love the photos but I am very, very disturbed. I DEMAND the audio file, as promised.

My mother gets VERY cross with me when I describe her beloved weepettes as dogs-with-a-pea-for-a brain. But. It. Is. The. Truth. LLGxx

Belgian children's books are magnificent. I am doing an OU course in children's literature starting on October, I may have to sneak references to anarchic Belgian stories in there for extra points.

Why does he not have a fox tail out his arse when flying out of the tree, then have it back later?? Did he go for seconds?

Woman - that sounds all too typical. Puppets. On your ceiling. yeesh.

Mrs Jones - Oh I LOVED the knitted brains. I wanted one! But knitting is not one of my strong points (that is an understatement)

KP - That makes me want to make carry on style jokes. But I will refrain.

Frau - not thus far. They are made of stern, Belgian stuff.

CA - you are almost certainly right. I see exposés in the Mail.

Iheart - what on earth did you tell them "there's this poor, sick lady in Belgium darlings. Don't look".

letters - well, no, I agree. But perhaps you CHOOSE to eat it with an axe? It rather tempted me.

cassandra - I know, it makes no apparent sense does it. the fact that he is only half a cock is never explored; it is merely a fact. WHY.

Parisgirl - and they think the English are anally fixated too. Weird.

Vanessa - oh, do. I recommend.

Red Shoes - you really need to come. Mainly to visit me, and then for the chocolate, weirdness, Cinq d'Anvers.

Mothership - I am working on it, I promise.

LLG - yes. Very very stupid. Endearing, but stupid. I'm with you on this one.

katyboo - the course will be excellent. I am looking forward to you posting about it.

Tsk, Reen, get with the programme. That's not half a cock, it's an entirely surplus to requirements owl observing the scene.

Further information about the knitted brains (precis - very smart person knitted it, basically because she could which is all the reason anyone should need) - http://www.telegraph.co.uk/news/newstopics/howaboutthat/4245919/Psychiatrist-knits-anatomically-correct-woolly-brain.html

I also recall reading something about people crocheting covers for treetrunks....

Aha - found it, it's about knitted graffiti: http://kingdomofstyle.typepad.co.uk/my_weblog/2008/11/crochet-me-a-city.html

Mrs Jones - I wish you would knit one. I bet it would be beautiful.

Caveat, actually, it was a slip in the regular regime of rx, and third child very much wanted and loved and adored (in case he ever reads this).
My current rx has me feeling frisky the third week in, much like what you describe. Inappropriate daydreams during meetings a specialty.