"Why didn't you tell me Prog Rock is seeing someone?" asks the CFO accusingly over coffee amidst the lentil botherers of Café Belga where we have repaired from the market after realising neither of us has brought any money.

"He kept dropping it into conversation last night. I thought I was supposed to know, so I didn't ask questions"

"No, you weren't supposed to know! I don't think. I mean, I didn't know. Though now I think of it, he said in an email he was seeing a lot of someone, but I didn't realise he meant he was Seeing Someone".


"That sounds like him. I thought you were talking about Keynes! That's why I went to bed".

I am a bit confounded. Obviously, this is a Good Thing. It's been five years. The Someone in question is pretty much perfect for Prog Rock. And anything that prevents him living the life of a holy hermit is to be welcomed. Intellectually I have no problem with this. The thought of him getting a little uncomplicated happiness is very cheering to me.


But it's entirely at odds with my policy of total denial. I mean, how can he be going out with someone when Nothing Has Happened? Mum has mysteriously disappeared, certainly, but could be back at any minute. I mean, perhaps she has just been very busy, or has gone on an extended retreat to a Tibetan monastery?


I know that isn't true. She's here, as evidenced on Prog Rock's camera, that I borrowed today. Look. I told you it was beautiful, didn't I? 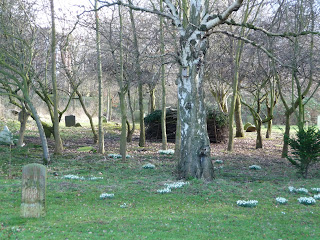 I know it, but I don't belive it. Not really. Because, you know, it's just too outlandish to be true.

So the Seeing Someone? It makes me feel funny. That's how articulate I can be about it.

Another weekend, another surreal Brussels happening, this time children's workshops in the underground remains of some Burgundian duke's castle. It has activities. They are free. I cannot listen to any more ambulance chasing adverts on the cheap tv channels the spawn are watching. Cilla Black is selling us death cover. Lashes has already advised me in the strongest terms to avail myself of the Mortgage Shrinker. Something has to give.


Me: Children, we're going somewhere. You probably won't like it, but there are ateliers.


Me: Nonetheless. We are going. And if it's awful we won't stay long.


Me: Hmm, in a manner of speaking, but also not really. Try not to prejudge it on that basis.


Off we all go anyway, me, CFO, unenthused but uncomplaining, Prog Rock up for anything, protesting children.

First, shadow making workshops. Four cheerful Belgian gents in an underground cell. They have a camel's head! I get to wear it! Afternoon is looking up. Lashes and Fingers mime drunk. They are very good. 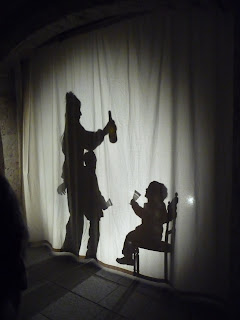 Then they mime hunters and kill each other. They are also good at this. 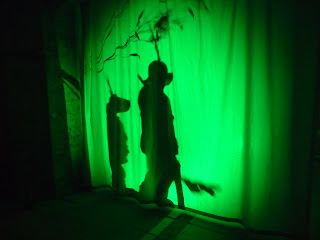 Next, a giant collage of above and underground Brussels. We are all alone with two more cheerful Belgian blokes. 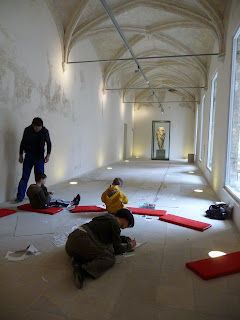 Lashes concentrates on an elaborate underground scene involving Sonic the Hedgehog, Super Mario and Luigi. I make a model of the blue brain, then the world's largest chicon. 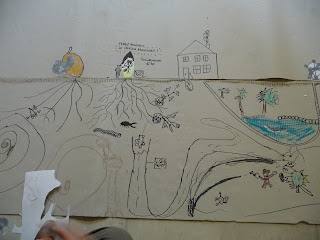 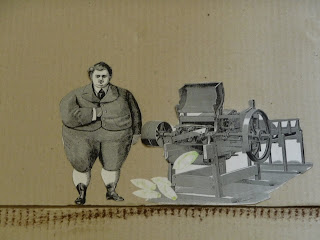 The Belgian men look at me with slight alarm. Lighweights. Call themselves Belgian?

The spawn rapidly get bored. I do not. Eventually the CFO bodily removes me from my Pritt Stick and we go home, overlooked by the giant blue brain. 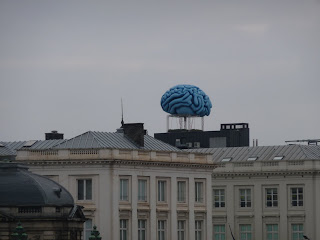 Another Brussels Saturday.
Posted by Waffle at 18:47

Emotions are odd things, aren't they. You would think that they would be aligned better with the intellect, but no, they aren't. And we end up feeling funny about things that we know deep inside are really okay.
But the blue brain might do the trick. Do you think it's trainable?

Oh sweetie, but she is. Gone to Tibet, I mean. It's just such a nice place that she decided to stay for good, and Prog Rock Step Dad understands that. And she understands his need to be with someone, too. So there is no need for you to deal with your denial, it's absolutely fine. Thank you for showing us the card, it really is beautiful.

The problems with emotions are that they are not neat. They slop about uncontrollably like when I make soup too enthusiastically. Damn them.

Pinklea might have a good idea about training the brain.

It sounds like a cool afternoon. I like it. I helped Jason fix shelves. This is probably why.

Also. Can you ask Prog Rock Stepdad to read something frivolous now please? I was so impressed when I had read something he had read that I want to do it again. I know I'm sad, but I don't get out much.

The chicon making machine! I love it! I'm glad you guys had such a good time out and about in Brussels.

I think the emotions you're feeling about the Seeing Someone stuff are totally normal for the situation so definately do not beat yourself up about it. Give yourself time to work through it. Do it with us! We will help you! Because we think you're great! xx

Of course you feel funny. It's bloody sad and very strange for you. A friend of mine pretends that her deceased Mummy is on holiday permanently. It's the only way she can cope. Cx

That is a raeally beautiful picture of the grave.
In this situation, mixed emotions = normal. Well, I think so!
I don't understand about the blue brain.....but maybe I just don't quite 'get' Brussels??
Anyway....sounds like you had a nice day all in all and hope that by now you have had a chance to talk to Prog Rock Step Dad.....and possibly to your sister as well!

I want to know more about this blue brain. I suppose you're going to make me google it.
I'm also flummoxed by item 2 in today's "Days of Grace". This is because I'm an awful person and shouldn't be reading blogs about tortoise sex.
I thought my father had gone to Tibet. Actually, he was in Alameda with Wealthy Third Wife. Now, he's gone to Tibet. Not with your mum, because your mum sounds like a nice person who shouldn't be in Tibet with someone like my dad. Maybe people are better versions of themselves in Tibet....

Just for you Persephone..

I love the statue of the naked boy on the tortoise - only in Belgium, eh? I think your artistic efforts are great too.

Your mother's grave is beautiful and I understand entirely what you mean about her coming back any minute. I still expect to hear my husband's keys in the front door, and probably will for the rest of my life. I think our brains are wired that way to help ease the pain. And I am happy for Prog Rock.

My wv is panace - sold short again then.

I cant imagine the world without my mom, my brain cant compute it.
Gone to Tibet sounds lovely and if it helps you through, there is nothing wrong with it.
There is enough sadness without forcing it on yourself.

I think it's pretty normal to feel 'funny' in th this sort of situation. I don't know many people who would be "well adjusted" enough not to. What I mean is, I think I might be a little bit worried about you if you didn't! Not that it's being normal eases it in the slightest.
Your Belgian Saturday sounds pretty fabulous to me!
xx

Your mother's grave site is indeed a beautiful place. Lovely and peaceful looking.
On another note, I have a photo of the naked dwarf on a tortoise that I took last year in the Boboli Gardens. Apparently he was some sort of entertainer. Fantastic!

I think I would feel funny, too, in that situation. And it's compounded by a desire to feel something other than funny. But what?

I love the shadow pictures. That looks like a lot of fun, actually!

I shall dream of giant blue brains now.

The chicon machine is a thing of beauty & a joy forever. Of course, it wld have been improved by a weepette or two...LLGxx

You are fiendishly creative, JW, so too the boys, and probably the Weepette, while the CFO is obviously creative vis a vis saving money and making soup...

My late dad took up with a partner a few years after my mum 'went off on a long bus journey' - I was surprisingly okay with it, (which some of my friends didn't understand) because what was most important to me was his happiness (and I think you feel that about Prog Rock Dad, for you obviously love him so) - It didn't change or obliterate his love for my mother, she still filled most of his heart. That was comforting to me, and his final thoughts were that they would be together again, although he had no faith to tell him that; He just knew...

Pinklea - I'm not sure, but you can have your photo taken with it. am very tempted..

Juci - you are right, she totally does. Tibetan monasteries make you accepting like that, don't they?

Katyboo - I've updated his list - Susie Orbach might be ok? And I've given him Stella Duffy book about South London launderette because that's where his sister lives, so that's easy for you. Though also cheating.

Pochyemu - yeah, I had fun. Way more than anyone else.

Cassandra - hmm. I keep hoping for acceptance or some such and not getting it.

Justme - it is, isn't it? I haven't even been there since headstone went up, so is nice to see how beautiful it still looks.

Persephone - you are! You are bad! It is for cakes. I am changing list forthwith.

CA - you are probably right, but it's odd, isn't it? Did you read Joan Didion? Quite thoughtful on these things.

Jessker - I think that's what my brain has done. Stupid brain.

Ali - It was! I love brussels so much. Also, NOONE was there. Same kind of thing in London = 80000 pushy middle class parents to wade through.

Iheart - Titian red took it for me. It's just perfect. Dwarf on a tortoise! What could be finer.

Lisa - It was lots of fun. They tired of it way before I was ready. I wanted to try the donkey head!

LLG - you are right. I have put a gratuitous weepette pic in today's post just for you.

Woman - yes, exactly this. I have got there now.