I was up in the night getting overwrought and pointless, so there is very little of note likely to come out of these fingers today. Instead I thought I would update you on what everyone in the Waffle household is up to.

No longer suffering from galloping consumptive man flu but still deaf in one ear. The "can we have sushi tonight?" ear. Went for expensive medical to celebrate imminently turning 40 and got clean bill of health, barring one thing.

He remembered, as we sat on the floor beside the dog's cushion last night (dog is not allowed on sofa, so we have to sit on floor. What is wrong with this picture? Hmm?) that it might very well be our anniversary.

"So shall we turn the tv off?"

"What, and have to talk to each other?"

"Come on. There's only Grand Designs. It's boring."

"Ok, but only if you promise not to ask me about: money, whether I have cancelled our old internet subscription, why I haven't discussed reduced working hours with the Bearded One, or anything else that might make me feel bad"

"And don't go trying to make me have sex, because I saw this picture of a duck's penis yesterday and it just won't leave my head".

"Maybe I could make you forget the duck penis?"

"Well then. Take my word for it, I won't be forgetting it anytime soon. Did you bring me an anniversary copy of Grazia back from London?"

Fifteen years on, but the magic is still there.


Now able, but entirely disinclined to read. Has a new hoodie which has encouraged him to start making gangsta hand gestures, part of his ongoing campaign to become a mec (defining characteristics - artfully spiked hair, rolling gait, lots of girlfriends). Still much preoccupied with death, and the optimum time to take the elixir of eternal life I may conceivably have suggested someone will discover before he gets old (I don't believe in God, ok?? I had to offer him some crumb of consolation! Listen Dawkins, what would you suggest?). Persecuted by dictéé and trying not to lose crayons, but perhaps not quite as sad and squashed as before Christmas. Has built himself a desk for "expériences". Like, mixing shower gel, triops food, chocolate coins and moths (lured in with Weetabix, died of natural, or possibly cereal, causes) in a sock. Mix, stand back, wait for cries of "JESUZEMANN!". 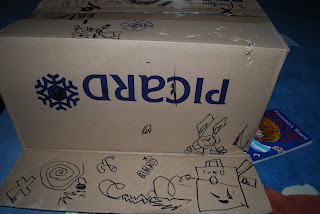 New Pikachu, purchased at flea market for €1 has its very own dreamcatcher, made from disembodied heads of family members attached to a coat hanger with raffia. 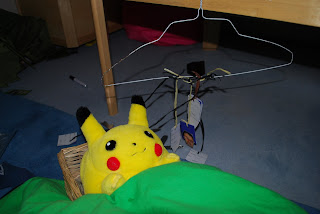 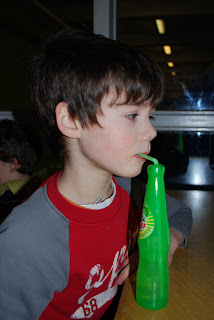 
Mysterious. Not given to eating. Dispenses information in tiny, grudging dribbles. I have learnt recently, for instance, that he has an amoureuse, called Mélanie. And that Eléonore likes eating handfuls of sand. That there was a tiny goat with tiny horns on the recent trip to the farm, and that bread is made with a LIVE ANIMAL. A live animal that hates salt. He told me this morning that school made the sun turn slowly. I can quite imagine it would feel like that in the gulag. The corridor of ennui has much the same effect on me.


Christmas presents still untouched in placard secret (refuses to play with them as risk others might SEE). I snuck in, in defiance of house rules, to take a picture. 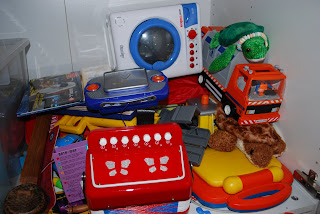 Enigmatic. Filthy laugh. Gorgeously strange eyes. Reminds me of his papa (who is/has none of those things). Soon to turn five. 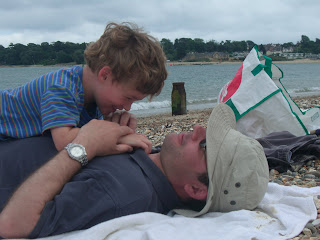 Idiotic, but charming. Has grown enough to leap onto forbidden furniture, and climb halfway upstairs, get stuck and cry. Vet could not be persuaded to cut his scissorclaws, so still lacerating everything. Mmm. Delicious dog though. Mmm. Understands "bon bon". And possibly "Putain Jesuzemann Oscaaaaaar!". Debatable. Nothing else, for sure. I tried to take a decent picture of him, but he licked the bloody lens. Duh. 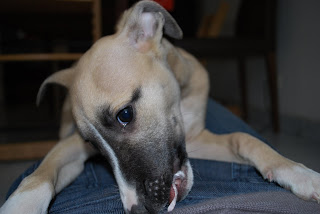 All defrosted successfully. Sitting on top of one another to get closer to the heat lamp. House smells of tortoise wee and burning shell. Boring.

Still alive despite CFO's frankly shocking suggestion we "dry them out" ("We have too many pets! Something has to give!"). Partner, reptile lover, engineer, FISH MURDERER.

Still present, despite purchase of what spawn are terming "tape-moths" (fly swatters). Fuckers obviously like biscuits.

JW, you are always seriously entertaining, even if you think you have nothing to tell... and your family is charming pictorially!

You missed nothing in Grazia this week - so so boring.

Can I ask why the Chrimbo toys are in the placard secret?!

I must remember not to follow your links - I think I have been scarred for life!

So far I have resisted the duck, um, appendage. But I know I am going to come back and click later. I have no self control. LLG xx

Utterly brilliant. You paint such vivid and entertaining pictures: reading your blog is definitely the highlight of my day. Hope you get a better night's sleep tonight.
Interestingly, given Duck's penis situation, my WV is pecksuc. I'm not sure that's going to make things any better... xx

Woman - he just won't touch them. They are 'secret' and must not be mentioned, let alone played with.

CA - why thank you! Credit crunch soup all round!

LLG - I urge you not to. But if, indeed, you can't resist, do not, whatever you do, enlarge the third last photo to get a better look like I did. Please?

House smells of tortoise wee and burning shell." Not as much boring as a rich and horrifying orafactoral image. Yuck!!

Belette - you'll never come and visit me now, will you? Woe.

....up in the night and getting overwrought.....
and yet still able to amuse us in the morning. Thank you for that.
The duck penis thing I saw yesterday and was thus able to aviod today. Thankfully.
Your children sound delightful. If a little strange. ( Strange is good....I like strange)
I am not understanding the point of the pontypines.....are they really PETS???

Justme - they are tiny, very pointless fish, that look somewhat like the pontypines in trippy children's tv programme In the Night Garden. But still, drying them OUT? What would Johnny Morris say?

nope. Always best to varnish fish. Never dry them out.

CFO has a fois gras liver?! So posh! I am impressed.

Duck penis = No. No no. The offer to make you forget duck penis? Hilarious. I imagine it said in a lecherous French accent with greased back hair and a raised eyebrow. And a fat liver.