BMF: So, how is it working out, the five day WEEKEND? Are you being a domestic goddess?

E: Hang on, I'll send you a couple of pictures of my domestic goddess-hood. Be brave. 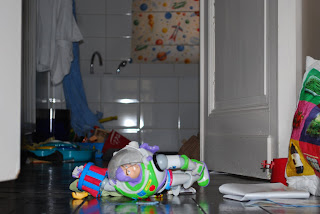 Buzz L'Eclair is defeated by the forces of inter-galactic chaos 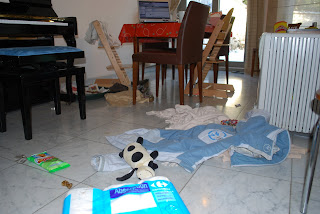 The kingdom of Oscar, prince of darkness 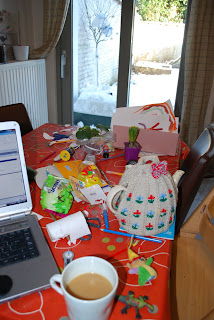 Erm, eclectic shabby chic? The teapot is the only well-dressed thing in this house.

BMF: Oh my goodness. I feel like I am on the set of Nigella Express! I keep expecting to see Charles Saatchi wander into the frame. The CFO must be delighted.

E: Oh, absolutely. [Don't get me started on the CFO. He's just called to tell me something bizarre about how I should make the dog a coat out of a large sock, with detailed instructions. Oh! And yesterday whilst watching Dexter he mentioned in passing that now, when he can't sleep, he plans ways to be a successful serial killer. He used to fantasise about ways to assassinate George Bush, but since he decided on the radioactive lectern he has had to find another project. It doesn't seem to bode well, does it?]

BMF: So what ARE you doing?

E: I never take off my pyjamas, eat nothing but toasted muffins and christmas cake, and spend my time hunched in front of my screen or mocking Oscar's skinny legs and stroking his silky ears. It's like, my best January ever, but I'm not sure it's a sustainable way of life in the longer term. Presumably I should at least be making soup or something? Or leave the house? And look what I found in Lashes' bedroom: 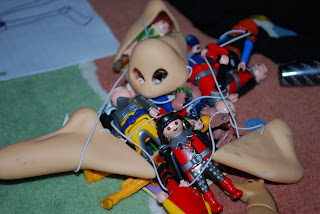 I can't help but feel responsible.

BMF: Oh, I shouldn't worry. Why bother leaving the house? I can assure you the outside world has not improved at ALL. There is always internet shopping. And you can train Oscar to go and get magazines soon.

But my mind is made up. The sound of the wind whistling around the back yard, and the tortoise shells thumping against their cage is not soothing, it is stultifying; I am pretty good at doing nothing, but this way madness lies. I am bored of myself. Even the dog is bored of me. Today I am venturing out. I have already washed and dressed which took me about two hours of forgetting what I was supposed to be doing and falling into a trance and wandering off to make more tea and admiring Oscar and eating cake. Now I am going to go out and buy some food that contains substances other than complex carbohydrates and some of that food may even be green in colour. Maybe, if I am feeling tremendously brave, I will even go as far as getting some new gloves to replace the five pairs lost since Siberian winter hit Belgium. Yeah! Hold on Brussels, here I come!


Um, would one or two of you mind checking back in a couple of hours to see if I have got round to actually locating my keys and handbag?
Posted by Waffle at 13:39

Don't go out - no good will come of it! Ok, maybe chocolate will come of it, but otherwise it is dooomed I tell you. Stay near the tea pot and the trussed up playmobile men and all will be well.

I feel that you are being premature. You must allow yourself an adjustment period. After, say a month, of being at home, in your pajamas you will have achieved the proper level of slovenliness so that you will hardly notice as days and days go by without leaving the house. Trust me, it's like cats moving house. You must not leave the house or you will become distressed and try and return to work.

All I could think, while looking at your household pictures, was how shiny your floors and bathroom tiles were. This will give you a clue to state of my house.
Word verification "aryfully". Haven't the foggiest what it means, but I believe it's the first time I've been given an adverb...

You have the right idea, JW. Going out is a very, very good idea. Otherwise, you will become a shut-in and all the joy and glee of working part-time will be overshadowed by the loneliness and feelings of self-disgust. You'll ruin it for yourself. Trust me, I know what of I speak.

Go out regularly. Put real clothes on at some point during the day, even if it isn't til 2pm. Don't let the best conversation you have with a live person be with the grocery checkout girl. It is essential to good work-from-home-health. Ok?? Ok.

I have alternated between part- and full-time work over the years, and I can’t say my house has looked much different in either cycle, although when I have more hours at home I have time to get an exact count of the dirt/food/fur balls rolling around the floors.

So, did you get back safely from the shops?! I love the pictures you have posted, and it is heartening that your home looks not unlike my own.

One of the bits of advice was, "Life's too short to stuff a mushroom!, and reading it gave me my own passport to slovenliness. A recommended read!

You must go out, but only to do naughty, frivolous things. You must buy shoes, eat lovely things and run about in inappropriate coats for the time of year banging sticks along the railings and shouting arse in French. You will be immeasurably cheered up, and you will appreciate your house more when you return with booty.

Well I don't feel like doing anything at all at work or at home, I took yesterday afternoon off to clear up about three weeks accumulated dust, dirt and cat fur and spent the entire time on the internet catching up with blogs.

Your house looks pretty normal to me; eat chocolate and stay in your pjs if you feel like it. Sooner or later you will probably get fed up and actualy want to do something - though I can't imagine anyone really wanting to do housework. Such a waste of a brain.

the playmobil population strapped to a giant nose with a bit of string is the sort of art i can understand.

but take heart! consider that there are indeed worse things to do than stay at home and unpick a nose. mass murder surely being one of them.

Is that - gasp! - sunshine outside your window? Le sigh.

Thank you all for your kind words. It took me something like two more hours to leave the house (fire went out, failed to relight fire, had to wait til giant pile of fire lighters worked, skinny mcstupid issues, keys hidden, bla bla), but I did finally get there.

WG - you are so right. All I did was buy cake anyway.

Ali - terrifying! Imagine me making my way back to the office and hiding under my desk! Argh.

Persephone - it is an illusion; the only thing shiny is the sun glinting off the puddles of dog wee.

Red Shoes - think of yourself as my homeworking sponsor. If I find myself wishing to go back to bed in a ball of dirty laundry I will call you up.


Elsie - ah, but with working full time you have An Excuse. Now, none. Bad.

Woman - I did, thank you. Goodness, the adrenalin rush!

Grit - I wonder if they might be anything to do with Fluffy?

Agreed. I'll talk you through.


I have to say, my WV is "moron" and I find that terribly insulting at this hour of the day. Couldn't it have waited til afternoon to point out my obvious faults?! Evil WV!