Oh lord, the NaBloPoMo pressure is getting to me. No matter. When all else fails, go for outsider craft and a few shonky pointless photos. That usually does the trick, doesn't it?


So, first I went to put Lashes to bed. Lashes is the king of the obscure tableau vivant. He gets half an hour to himself when Fingers is already in bed, and uses this privileged time very reverently, for complex play situations involving lots of elaborate cross-species domesticity. I will record more of them, they are often very funny. This one is not his best by a long way, but I rather liked the "parents" having a civilised evening around a dinner of plastic cow. 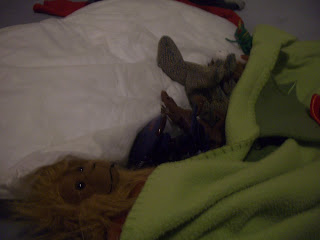 A sort of utopian vision, in which the howler monkey lies down with the window walking robot, who in turn shares a pillow with the rubber grasshopper and the rubber lizards and the plastic bones. 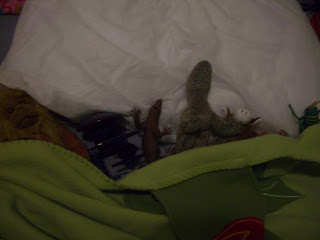 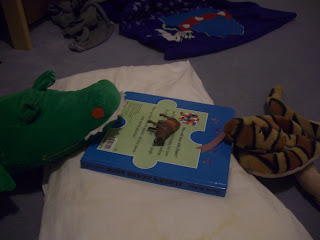 Also somewhat utopian. I know he knows we don't sit down and eat dinner around a table with a little light discussion of narrative devices in Russian literature when he is in bed. He thinks we watch "killing things". Clearly, the world is a better place when you meet the plush alligator of your dreams and settle down to raise a rainbow brood of plastic novelties.

After that, I made a pear shrew. Katyboo, has brought fascinating scenes from the shrew mortuary to the internet this week which has been tremendously inspiring for me.

I am not precisely sure what is going on with me and Katyboo. We are having an elaborate internet courting ritual whereby we bring each other strange virtual offerings. It's sort of how I imagine medium sized carnivorous animals (badgers, say, or polecats) might court, with small dead creatures laid out as an act of love. It's rather beautiful, anyway, but also a little disturbing. In another life, I think we could have been a pair of those peculiar maiden aunts that live together in a nest of squalor, and develop their own language and have creatures (shrews?) nesting in their hair. It might still happen. And would that be such a bad thing Katyboo? Possibly not.

Anyway. I saw this pear tonight, with its long, elegant, elephant shrew nose, and I knew exactly what I had to do.

Where did its head go? Damn! Oh well, it is late and the CFO would have divorced me by now if we were married. Let's go with headless shrew. 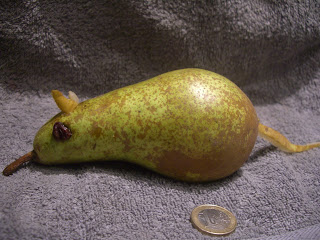 Shrew mortuary rules require that the shrew be displayed with a piece of currency to demonstrate its size. This shrew is giant.

You are a genius. That is possibly the most immortal thing anyone has ever made me.

The courtship thing is weird isn't it? A bit like when our cat laid out four dead rats in a neat line outside the back door to show how much he loved us...

But cool and fun, and indeed something we can bond over when we are elderly with moustaches, living in the shady pines rest home for criminal bloggers.

I once had a cat who brought me the severed head of a squirrel, and hid the rest of that animal in my potted plant on the front stoop. I picked both up with a garbage bag over my hand and disposed of them while the cat watched, and she never came back.

Let that be a warning to both of you re: your shrew love.

is it wrong to think the pear shrew is cute? and the pear pear shrew...

my husband tells a story about the day he got to carry a dead mole around while riding in the semi of his uncle's neighbor... glorious day in the french countryside! (dead animals and all - i had to share and i also wonder if i am the only one who is a bit repulsed by the idea of letting your 4 year old carry around a dead animal all day or does that just mean i am a bourgeois snob?)

Katyboo - yes. I may have stunned the internet into silence with the pear shrew.

Pretty Jane - Yes! It's like a pear but more so! Pimp my pear shrew!

Kate - No, not wrong at ALL (I would say that though). My children have been keeping a dead bee in a kinder egg container for six months, so I am ill-placed to talk about the dead animal thing, I fear. Your husband's childhood holidays sound about as fun as mine.

I think there is a whole career ahead of you as a fruit sculptor.... Incidentally, I'd rather have a pear shrew left on my virtual doorstep than a real one any day. Cats should learn from this.

nabopoopopsywotsit has a lot to answer for! Can't even think what to say about the shrew. Will email you a picture we took of a whole shrew family last year - looking cute and fluffy and not at all dead! t.x

I agree with welsh girl that I would rather have a pear shrew than a real one anyday but I fear cats will not learn from this - mine at least can't read.

I have had many such gifts in the past but my current batch of cats are too stupid to catch anything except next door's frogs. They bring a live frog in and, when it gets boring and refuses to shriek/jump, they all sit around looking at it waiting for me to arrive and shriek/jump and try to catch the bloody thing and put it back over the fence.

I feel like the dead shrew this morning. Maybe someone will throw me a quarter after I curl up under my desk.

Once I found a tiny dead baby mouse covered in maple syrup at the bottom of my recycling bin. It looked like something you'd put on a cracker with some Gorgonzola.

WG - ah, yes, the dead offerings. Tortoises do not do that. But Julius used to make a particular point of pooing on my plate.

KP - Yes please! Do they have huuuuge shrewy noses/trunks? I do hope so. I await.

NVG - you are so shrewd.

CA - noone brings me frogs. Noone. I feel affronted.

The pear shrew is adorable. However, having not had any breakfast yet, I keep wanting to eat it. It looks delicious.

Oh, but P! That is so sad! A tiny syrup coated mouse. How did it get there? I would totally photograph you with a quarter if you expired anywhere near me. Promise.