Now back! With a thousand percent extra drivel!

Sorry, I missed a day for Halloween. It was such a terrifying maelstrom of bad parenting and travel and general hell, I had to curl up in a foetal position and drink too much wine and go to bed at 9 while posh trick or treaters knocked politely and claimed sugar free jelly snakes and 70% cocoa solid chocolates (Chiswick, enough said). I didn't feel up to wearing my Viking beard, the children broke my spirit totally with their running away around Hanover Square, throwing two pound cookies at pigeons, drinking juice out of green fingernails and bickering. However, since I've signed up for NaBloPoMo, this will not have to happen again, or the internet comes round your house to smite you with scorpions. Or something.


We are finally back in Brussels, where it is pouring, Belgian administration has unleashed a wildcat public holiday on us and Lashes is trying to hatch his Triops eggs from the Science Museum. The Triops egg box is full of weasel words like "nearly all packets contain Triops eggs" and "the majority of triops eggs hatch" in teeny tiny font. We have also left the instructions in London. It's like the original blue print for the expression "doomed to failure". Fingers is trying to put plastic witch fingernails up my nose whilst bilingually whining at maximum irritation pitch. It is four o clock which is not nearly late enough for my plan of vodka/sleep/kitschy French tv/ginger buns and the rising tide of despair is engulfing me. It is, naturally, dark.


Let's cheer ourselves (uh, me and my multiple personalities perhaps) up. I will tell you the stuff that made me laugh over the past couple of days and you can do the same. OK? OK.


1. Stupid story from my sister, possibly urban legend as it supposedly happened to her "housemate's cousin's friend". Ha. Without the Space Cadette's incredibly sweet and rambling delivery it probably won't be funny at ALL, but here goes.

The 'friend' and her husband had a large python which they used to allow to sleep on the bottom of their bed "in a curly ball" (said Space Cadette, this already made me laugh). One day it stopped sleeping in a curly ball and started sleeping lying straight out in a line between the friend and the husband. At the same time the snake started to slink off into corners for whole days, doing nothing and not moving. It also refused food. The friend and her husband were very worried about the python, thinking it must be ill, or depressed, and took it to the vet. The vet listened carefully to the python's symptoms, and their concerns and said "The python is starving itself in order to be able to eat you. It is lying between you on the bed while it decides which of you to eat first".

2. Prog rock step dad painstakingly sewing Lashes a pair of bat ears out of old socks. And phoning the chip shop to ask what a Kermit was (deep fried mushy peas, apparently). And showing me how his wind up lederhosen fell over after their manic dance. I bought him wind up lederhosen for his sixtieth birthday. I am a very very bad step child.


3. The sex shoppe as pictured in my last post: 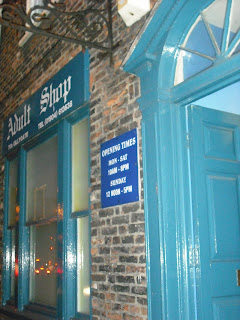 was, my sister tells me, at the centre of a Yorkshire Evening Press scandal, for allegedly selling people pornography that wasn't pornographic enough. I have just checked the YEP archives but can find no trace of this. Still, good story. There are many more.


4. Fingers breaking into heavily accented and very seriously delivered version of Amarillo on a District Line train and most of the carriage joining in with the handclaps. It was like that bit in My Best Friends Wedding (marvel at my glittering cultural references) where all the lobster restaurant sings 'I say a little prayer'.


5. They Might be Giants here come the 123s, especially this one, courtesy of Peevish. Thanks Peevish!

7. All my old photos from York, especially the super super ugly ones (yes! there are even worse ones! Going to showcase a few over November I think if I can.

S'all. Shiny things please. November is long and cruel and we will need each other more than ever.

DEEP FRIED mushy peas??!! It's as if your Norther Yorkshire tastes have met my Deep South deeply fried tastes! Your mushy peas are in my deep fat fryer! Your deep fat fryer's in my mushy peas! Two great tastes that taste great together. If my mouth weren't already chock full of toffee from last night's festivities, Id be totally salivating.

Well, you know what they say in Belgium...

"Rain in November, Christmas in December."

Wait. That wasn't so funny.

But here. If your computer streams video reasonably well. Check out Harry Enfield on YouTube. This should perk you up...

This true story made me laugh, but it might be just a shopkeeper joke. Shopkeeper friend was having a bad day, lots of really annoying customers. The best/worst was one who phoned up and said in a shouty voice: "HELLO I WISH TO MAKE A COMPLAINT ABOUT THE WEATHER."
"Um... the weather?" (Need I point out, this was not a weather shop?)
"YES A MEMBER OF YOUR STUFF SAID IT WOULD BE HOT AND SUNNY! AND IT ISN'T!"
Friend (baffled, wondering if this is a wind-up): "Um... shall I slap her for you or something?"
"YES THANK YOU GOODBYE."

I'd like to tell you something funny, but I have to save it all for my blog - I've signed up for NaBloPoMo, too.

And instantly regretted it....

Tilly had triops for christmas two years ago. She is the clumsiest child in the world and broke the unbreakable tank within two hours of the first one hatching and they all died a horrible, lingering death. Which was nice...

Umm, that's not very cheery is it?

Oscar did ask today for some batteries for his bum (I had to get him to repeat it to be sure I heard it right). I asked him why. He said; 'my bottom isn't working'. Not sure what to make of that, but refused batteries anyway.

PJ - Secretly, at heart, you are a Yorkshire lass. I feel it.

Exapteek - no, I think you'll find it goes "Rain in November, the Père Fouettard puts you in a sack and takes you to Spain". True. (ish). I will expand on this soon.

But so easily resolved! Promise physical violence and customer is mollified. Yes. It is funny.

Curses, Barb, we can bore each other rigid all month as the rest of the internet goes and leads a normal life.

Yeesh. Yes, keep him away from batteries. Triops tragedy seems inevitable BUT there is another TMBG song that goes "The triops has three eyes" which is earworming its way deeper and deeper into my brain. The sound track to their prolonged and painful death I imagine. Oh yes, we're much more cheerful now, aren't we!

You may be curled up in a foetal position, but your instincts are spot on about the starving python story. It's an urban legend, and yes, the "FOAF" (friend of a friend) reference gives it away.

Shiny, funny stuff? This has been making the rounds. Have you seen it? Something is added each day, kinda like an Advent calendar...

I very much enjoyed the snake story.

Funny... funny... looking for funny... Will cute do? Last night, my almost 3 year old cradled her first peanut butter cup in her hands and said "I love you" before eating the chocolate off the outside, spitting the peanut butter out and declaring "It's scusting!" Sorry. Maybe you have to be the mother of said child to find that cute. dunno. Not so funny was the vomiting that started right before I went to bed last night and might not be done yet. Yay November! The only thing that makes you livable for me is the promise of pie and stuffing at the end of the month. It's not too early to be wishing for May, is it?

Persephone - I am SO impressed you did that. Also, SP advent calendar thingy. Just beautiful. Go look people.

Kate - Yes. Yes indeed. It's going round and round in my head endlessly. If the triops could get its act together and fucking HATCH that would be a start.