(Meh-zze is supposed to be the follow up to smorgas-bored but I think I may tire of this conceit very very quickly. Possibly even before your desire to bludgeon me to death becomes ovewhelming)

This made me laugh so much I got stomach ache today. And it led me to this which is nearly as fabulous. And every time I look at them in happens again. Argh! Can't laugh any more! Hurts too much!

The best sculpted dip ever

As if that weren't enough joy, my darling Violet is back from her holiday and has brought me this picture which is making sweet love to my eyes. 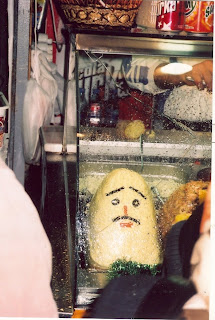 It's a hummous man! The face details are made from pepper and olives. Look at his sweetly pleading expression. "Pliz to eat hoomoos man? Pliz? I iz deleeeshos" he is saying. Now. We didn"t have a 'middle eastern spread sculpting' category in this year's fête did we? BIG oversight. Watch out in 2009.

The CFO came back from a winetasting at a supermarket last night, where I had requested he buy moth spray (yeah, yeah. Bite me David on your crepe soled heels). He came home around 8, and banged into several things before curling up in a corner of the sofa with a bowl of crisps.

"Ah; I asked them for anti-mouette by mistake".

"You asked them for SEAGULL spray? This is your fucking language! Freak."

"There was wine. Can I sleep now?"

"Fine. But I'm feeding the moths your birthday jumpers. They demand a sacrifice."

(Can anyone work out what film we were watching? Because we didn't have a clue. French tv news had just featured a ten minute report on an outsized salmon that had been caught near Perpignan (because financial apocalypse comes a poor second to large fish, obviously) and we were desperate)

"Seriously that is a piss poor alien. It's going to have to do better than waving its hoover tubes around if it wants to take over the world"

"It's just a big a tripod with a fusil (shotgun). It's in a film with Tom Cruise. It has no chance. It wouldn't even get past the security at Tom Cruise's HOUSE"

"Right, so now it's put Tom Cruise in a giant colander. Sound plan."

"What the fuck? Why is he holding paper clips? He killed it with large stationery?"

I want to go back to infant school...

"Did you have a nice day, Fingers?"

[I should emphasise that this is absolutely out of character. Fingers fears that if he utters more than about 5 words a day, he will betray vital secrets of national importance]

.. but not to primary school

"How about you Lashes?"

"You forgot my goûter, I didn't have my gym kit, I got hit by a football and the big boys laughed, Madame gave me a punition for using crayon de couleur instead of crayon ordinaire and I'm in charge of the days of the week and EVERYONE LAUGHED because I mixed up jeudi and mardi"

Coming up this weekend on Belgian Waffle:

A death match between a sponge and some pipe cleaners

We test out the CFO's parents' cocktail shaker recipes

I am LOVING hummous man!! Did they have a nice pink taramasalata lady too I wonder??

Or even a pair of tarama breasts? (Sorry, unnecessary I know but I couldn't resist). As for apologising to Brussels - must you?

PM - I don't want to hurt its feelings.

I'm not even done reading yet, but I had to stop and say "This is so funny! You are killing me!". Anti-Seagull spray?!!

This is the funniest thing I've read in ages. Seriously. Pliz to eat? Seagull spray?

I would like a hummous man! He could supplement the vast quantities of hummous my children consume every week (i kid you not).
And I want to shop at supermarkets in Belgium too - sounds like more fun than round here.

War of the Worlds, and I want to go to Infant School as well. It is all about fresh dairy products, with live goats. Heaven! And it is true about the papa goats. They piss on themselves as well, because they think the lady goats like the smell. Brut, for goats. (Did I just horribly show my age with that Brut reference? I believe the answer is Yes.)

Brussels should be apologising to you, this post is fried gold!

I can't believe the word ver thingy is reshatpq!

Take me to Perpignan NOW.

God, I love that part of Frogland. Well, and many others, but Perpignan really turned me on.

Peevish - you are lovely and thanks for the film. Man, it really sucked. But given how much I was hoping Tom Cruise would be hoovered up it was bound to be a disappointment. 'Brut for goats' is genius.

NVG - the supermarkets are fine as long as you're not in a hurry, or needing to find tin foil.

MR F - 'Fried gold' is the best compliment ever. You are no longer barred.

Zoe - I probably made Perpignan up. All I actually remember was the gaping mouthed 7 kilo fish.

The check liquidating business is an other option to the customary money related business and could be used by essential managing an account benefits in the business area later on. check cashing san diego