Things are getting terribly dull round here, aren't they? We need a project. Any ideas? In the meantime, more despatches from the front line of domestic tedium.

I have already mentioned this in passing, but my younger son Fingers has now been a parrot for approximately a month. He no longer answers to his name, rolls his bedclothes into a nest shape and refuses to kiss us, but sort of does a pursed lip 'peck'. So we bought him an egg. 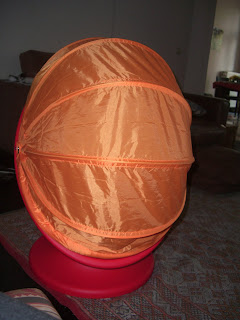 He sits in it and squawks. 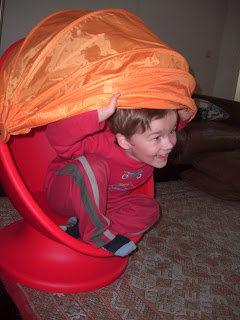 Sometimes we put a piece of cuttlefish in there with him, or offer him a worm, but he's mainly happy just sitting.
I tend to welcome this kind of phase. It gives me a cheap laugh, which is the best bit of having children, and it's something to throw at them when they are fourteen and they hate us. Lashes combusts with rage and mortification whenever we mention his lengthy pink phase. I know how he feels. I wore boxing gloves every day when I was eight and had a strange fascination with carpet beaters. This is without going into the hideously protracted horsey phase, where, as a frustrated townie, I covered the bottom of my wardrobe with 'chaff' (anyone know what this is? I used to buy it in small bags by mail order along with individually selected lengths of miniature fencing) to create a sort of indoor stable and made our elderly, bad tempered rabbit "show jump" over bamboo poles in the back yard. And wear my Pony Club tie every day. And write creepy fan letters to show jumpers. Actually, enough about my pony thing, it's creeping me out. Hacking jacket. Laminitis. Jodphurs. Hoof oil. Brrrrr. Go on, tell me about yours.

There is little scope for superiority on any side. Because, as he sits in his nest, and I reminisce about by my love affair with some fat shaggy creature smelling of manure, his father is doing this: 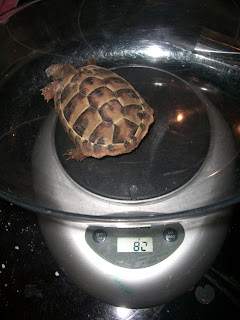 There is something terribly appealing about a tortoise in a set of kitchen scales, no? It made me want to take bad, bad pictures, but unfortunately the CFO was at home all day banging things and swearing and filling in his tortoise graph. 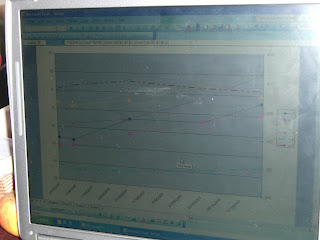 You thought that was a joke didn't you?

I will though. The next time he leaves the house. Honestly, the lack of support for my artistic endeavours is a burden, really it is, but my spirit cannot be tamed. Ha! Watch this space.

Gosh, your tortoise husband is very handsome. It's fantastic that's he's been able to achieve so much (he's a CFO! cool!) for his (totally under-represented) species.

I wouldn't complain too much about the banging around in the house. It's probably pretty damn hard to hit the right keys on that keyboard with his scrabbly little claws. I think he's doing a darn good job and that you're being just a little bit harsh with him.

But that's just me.

"...filling in his tortoise graph."

Congratulations, you win October's 'Euphemism Of The Month' award!

There is a prize, but as you are located overseas I shall have to work out how to give you one.

Expateek - my diminutive reptilian husband and I nearly fell off the sofa laughing at that. I've given him a dandelion to make up for it.

Fourstar - I arrive in England next Friday with my parrots! Be careful what you offer so carelessly. I like prizes.

I am putting deux et deux together: the CFO, your attraction to Kiki. It's all falling into place. Does the CFO know about your secret trysts at the menagerie?
Hmmm...I think we should be told.

Have you checked out the weight on those scales? That's 82 grammes of hot reptilian love.

That is quite possibly the most fabulous use of Excel. Ever.

You should totally write Bill Gates. He'd be so proud! You just KNOW he's got some freaky ass spreadsheets kicking around, too.

You do indeed deserve a prize!

I always wanted a tortoise. When I was eight I met a boy in our village who had one and was bored by it. He offered to swap it with me for a Sindy horse. Naturally I jumped at the chance. I got home with my prize well chuffed. My mother was hysterical and frog marched me down the hill to reclaim the horse. I cried for a week. I don't think I would have had a tortoise chart though. I just wanted to teach it to do tricks and paint it different colours.

I went through a phase of pretending to be blind for a while which was a bit weird!

My cousin on the other hand outweirds all of us. I will write a blog entry about him because it is far too long to go into here!

I still go through phases that are horribly embarrassing in retrospect. I'll only admit to the childhood ones of wanting to be a horse and wanting to wear glasses, I used to make myself many pairs out of cornflake boxes

Chaff can be either the outside papery cover of grain seeds or straw chopped very fine by a chaff cutter.

As a child I used occasionally to communicate by quacking like a duck for a while, but I didn't behave like a duck in other ways.

I used to walk around the house holding a mirror face-up in front of me so I could pretend to be walking on the ceiling.
I also created ballets to my mother's record collection (mainly her Readers Digest Light Classical box set). I was particularly proud of my creation to "Die Moldau" from Smetana's Má vlast. I called it "The Singing River", and was mortified when anyone walked in on me while I was dancing it.

You should all have prizes for your appalling childhood habits. I feel quite comforted. Persephone! That's just wonderful. I was wondering whether to admit to my attempts to get my primary school class to do a comedy routine to 'What a Swell Party' from High Society but decided against. Oops.

Lulu - cardboard glasses! Yes! I would happily have exchanged mine with you for a 2p chew.

Katyboo I wonder what became of this strange boy who thought a Sindy horse was better than a tortoise. Nothing good I suspect. I was always getting in trouble for unwise swaps too.

Pochyemu - I'll tell him (CFO not Gates)! He'll be glad of some support. He gets precious little here.

Oh, I've remembered one - on long car journeys I always sat in the back on the nearside and there was a white horse which galloped along beside the car. I worried when there was a long stretch without a verge or field, as all that galloping on tarmac was bad for his hooves. Fortunately, when there wasn't any suitable surface for galloping, he was able to jump for long distances, almost as if he was flying. He could make one leap last as long as I could hold my breath.

I never thought of walking on the ceiling. I regret that missed opportunity.

My husband's animal-loving family used to have a sweet little turtle that he named Sphincter, for reasons still unknown. My father-in-law had absolutely had enough of all the pets running through the property, and when an old friend called one day to catch up, the F-in-Law said, "Yeah, everything's great here...we've got three children, two horses, three dogs, two cats, four birds, and a turtle named A**hole." This story still cracks me up, to this day.

I had a hair fetish when I was little--I'd take absolutely every hair implement in the house (barrettes, combs, elastics-with-plastic-balls-on-them, hair pins, etc.) and put them all on my head at once. I had to work quickly in order for my mother to not catch me, but I was just gorgeous. There are several photos of me in this stunning state in the family album.

Z - yes, I did this too, except I was riding the horse. Oh god, this is mortifying I am stopping now.
What is chaff FOR anyway?

I bet you were gorgeous Elsu. The parrot child also insists on wearing a pumpkin costume on any 'special' occasion (Christmas, weddings, birthdays). I encourage it.
Tortoise called sphincter. Lord. You are so at the right blog. Welcome.

You, CFO, tortoise - is that a menagerie à trois?

I just spent a long weekend in Austin, Texas to celebrate my wife and my 5th wedding anniversary. Austin, simply because we have dear friends who live there that we wanted to see. Also because we could drive there (although after yesterday's 11 hours of driving, my ass regrets that decision). Anyway, as we were riding through hundreds of miles of countryside, and occasional copses of trees, I remembered how Little Me used to fantasize about running away from home to live in a thicket, where I would build a shelter by digging a series of burrows and covering the entrances with intricate arrangements of branches. I thought I'd be so happy there, snuggled into the earth like a like a little rabbit. Even now, the thought is vaguely comforting. Not nearly as comforting though, as THAT EGG!

What a lucky little parrot that Fingers is. His very own egg. I would have been in heaven with that egg. *sigh*

I went through a stage of wanting to have buck teeth. Do NOT ask why as I haven't a clue. We have a years worth of photos of me sticking my teeth out over my bottom lip to perfect the look! DS went through several months of wanting to be called Gary, now will only wear black and speak in tongues, but that's called adolescence. DD just wants to be a horse. VLiF

my younger sister and cousin were a cat and a dog for several weeks at one point. they had to be fed in bowls on the floor, cleaned themselves by licking and communicated in a series of mews and woofs that got quite sophisticated after a while.

You should have an egg Red Shoes. Maybe I will make you one out of papier mache. Um, best not actually.

VLiF - Buck teeth. I reeeally like that one. The horse is a classic isn't it? Is there some freudian theory about small girls and horses?

Bonnie-Ann - you didn't join in?

jaywalker: when i say younger -- i mean like 12 years younger (so they were like, 7, you do the math). i participated by feeding them, grooming them, petting them and occasionally breaking up a dog/cat fight.

What a lovely older sibling/ enabler you were Bonnie Ann.