Things for which York is notable:

Pervasive smell of chocolate from three (THREE) resident chocolate factories. When the wind is in the right direction it feels like you are walking around in a giant After Eight.

Historical reenacters lurking around every corner in their woad doubloons and hemp tabards, grooming their beards with oversized chips.

Slow moving tourists clogging its main arteries marvelling at the quaintness (even the sex shop, or sex shoppe as it is known here, has a half timbered frontage and olde worlde font. I will document this for you tomorrow because fun is a scarce commodity this week).

Barnitts. Just, Barnitts. We will create our own wipe clean handy hommage to Barnitts this week I think. Lashes' first Christmas present from his adoring parents was a length of dog chain from Barnitts. Barnitts bears witness to the lives of York residents from cradle (dog chains to chew) to grave (spades?). It's the ultimate York institution.

Disproportionate numbers of one time residents are bloggers, or rather bloggeuses of note. I cite Petite Anglaise, Antonia, the Non-Working Monkey. I could probably put together a theory on this, centring around the fact that there is fuck all to do in this city if you don't like shouting viking curses whilst dressed in a hemp shroud and carrying a giant replica skull splitting tool, and we are forced to create our own entertainment.

The National Railway Museum, a cavernous, gloomy hangar filled with pieces of obsolete machinery where gentlemen ranging all along the autistic spectrum rub shoulders with excitable, soon to be desperately disappointed small children.

An Archbishop who sleeps in a tent in the cathedral. Or did I dream that?

Faced with this smorgasbord of stimulation, we went to Sainsburys and bought pumpkins. Yes, it is a week early, and your point is? I give you: clock change, extreme cold and darkness, sleep deprived uber-brats. We take our entertainment where we can, my friends.

The spawn carved pumpkins in their own likeness: 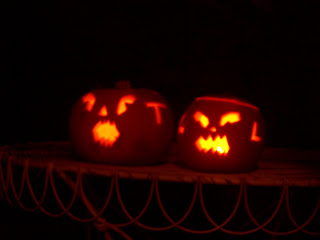 When I look at this picture I can almost hear the smaller pumpkin wail "He scribbled on my picture!" as the big pumpkin unconvincingly maintains "It was an accident!".

Then we decorated pumpkin biscuits (my god these photos suck, apologies, but I know it's been a while since we had a wrecktastic display of ill-advised home baking). I love how the ones with the orange faces look like clowns who have suffered third degree burns, but one of the burns victims seems incapable of learning his lesson since he seems to be smoking a green pipe. Could you match the biscuit to the person? Lashes did 2, Fingers, me and the Space Cadette one each. 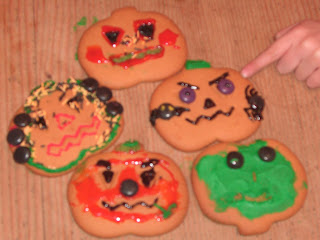 Then we teased prog rock step dad about our childhood Halloweens.

"Emma says you carved her SWEDE" says Space Cadette "I'm sure you never carved ME a swede. Also, why a swede? WERE YOU ON DRUGS."

"There were NO pumpkins to be had in York in 1980. They just didn't exist. I am not even sure they had any even in London in 1980" protests Prog Rock Step Dad.

"Did you try Leeds?" says the Space Cadette incredulously.

"Hmm", I say, sceptical. "I always assumed it was some kind of conscious, anti-Halloween stance on your part. Like, 'we don't buy into this gross American consumerism with your grotesque giant easy cut pumpkins. This small swede makes a perfectly serviceable lantern, and look, I can mash the insides up and turn it into a joyless soup'. Your act of Halloween protest, if you will".

"You don't think I did it voluntarily do you? Have you ever tried to cut a swede? Have you? Can you imagine anything harder to carve into a lantern?"

We reflect for a minute on the act of love involved in making a swede lantern for your child. Not even your biological child. It is awe-inspiring.

"Celeriac would have been harder" I say cruelly.
Posted by Waffle at 21:22

Good god - the actual thought that you DO things with your children as a recreational activity - if that is the correct expression - means that you are on my hit-list.

Ummm - my kids and I used to make soup. I don't think that they even know what a home-made biscuit is. The closest that my daughters got to baking was sticking M&Ms onto their birthday cakes.

I have a dim recollection, that in Glasgow, carving swedes was quite normal when I was a child.......hmmmm....
Happy halloween indeed!
And the biscuits are fab! Just don't EAT them...

Yay! That's the Jaywalker we know and love. Carving up a storm in chocolate-town. Guess what I met Petite in Belleville on Saturday night!! Did I say that already? Anwyay it was awesome.

Srsly, I was all growed up long before I ever saw a real pumpkin. It was always turnip lanterns in my neck of the woods.

I have also been busy with a sharp knife, and am coated stickily in orange pith. Such fun!

Have spent many a weekend in York, but, uncharacteristically, managed to overlook the chocolate aspect.

Anyhoo. I once carved a swede for Halloween due to lack of pumpkins. It was a bloody nightmare. Have blogged about it somewhere. Stank to high heaven, took about a fortnight. Looked shit.

Parents went to York for honeymoon. My dad got lost on the way, had a migraine and had to go to bed. My mum ate entire room service in one evening. My dad took my mum to the railway museum and she left him in there after he insisted on reading every plaque in the entire place. He was in there for four hours. Amazingly they are still married and just about to hit their forty year anniversary.

Plus, hardware shops in Spain or maybe Italy are called Ferretarias!

Kohlrabi would also be pretty difficult.

I'd LOVE to go to Barnitts. Reading about it on Antonia's blog made me realize it can fulfil all my dreams.

I think swedes probably are harder than celeriac - the ones I buy are anyway. I need a rest after peeling the wretched things. And Prog Rock Step Dad is right, I never saw pumpkins around in the 80s - and I was living in London then.

I had to learn to cook as a child -I had to make cakes/buns/pastry to earn my pocket money so I inflicted the same torture on my kids. At least they can feed themselves if I go out, or stay at work late (now they are too old for babysitters).

I liked the viking museum, although some of the wierdly dressed people at the York Dungeon were a bit worrying.

My word verification is doing -how appropriate.

Aha, the pumpkin, an interloper in the British root vegetable canon.

Zoe - those were Sainsburys finest. Are you still going to kill me?

Daisy - Were you star struck?

HFF - he liked metal. And was too young to know any different.

Katyboo - when my sister took a group of autistic kids round there, the only way they could get them all to leave was to turn all the lights and electricity off. Srsly. Ferretaria? Really? Too good.

Mr F - ah the Proustian memories set off my the smell of singeing turnip..

Peevish - you, me, the hardware section, gin fizzes. It must happen one day.

Alienne - I wish you lived in my house. You would put a stop to the baking atrocity.

(Sigh.) I'm hoping a swede is the same as a turnip? Otherwise, I totally missed the joke in that last bit, and may have read the last half of the post for nothing.

PJ - Yeah it is. They don't even have the same name in various parts of Britain, so what hope could you have?

I love you. That is all.

Singe - Reciprocated, like, a gazillion percent. Tune in later for more scenes from your misspent youth.

this is just amazing. So nice when you need to know how to use snapchat on mac snapchat emoji using android emulator. nice.

good and very helpful. download whatsapp messnger is very popular among users. It is available for android and ios devices.

this App is for fast file sharing. now read this simple shareit app http://shareitforpcguide.com guide to know more about this. Great article.

you can Now download and use snapchat on your computer. For this simple steps are given here. nice.

this App is for fast file sharing. now read this simple shareit app http://www.shareforpc.com guide to know more about this. Great article.