Baking and other offences

I have been so idle this weekend that I think my legs have wasted away to Ian McShane/David Hasselhof punyness. Seriously, both these men have a serious upper/lower body disproportion - they're like male Barbies, defying the laws of the physical universe. You never noticed? Look closer. And while you're at it, try and find a full body shot of Lovejoy era McShane - it's impossible. He's had them all destroyed. Conspiracy!

Sadly, as we know, the devil finds work for idle hands. I give you: 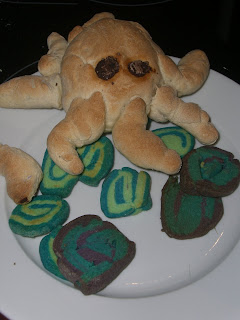 I saw this as a malevolent giant squid ravaging a peaceful community of sea snails. Fingers claims the squid is "the sun". Ha! In your darkest nightmares perhaps.

As you can see, these blue, green and purple snails make a really refreshing eye mask*. 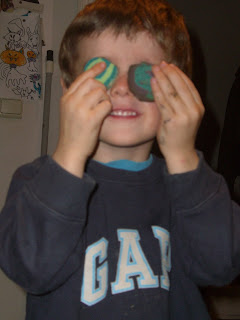 Look how deliciously clean those hands are..
(*Not recommended for internal use)

After that, we moved on to "expression corporelle", or recreate your favourite character using the contents of the recycling bin and your demented imagination.

Any guesses what this was supposed to be? Belgian prize for the closest guess! 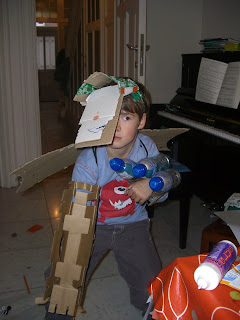 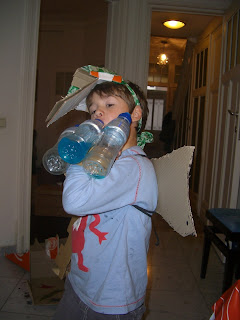 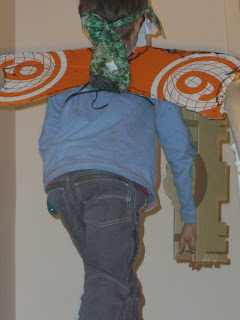 After that, some of us chose to mock the afflicted and deluded. 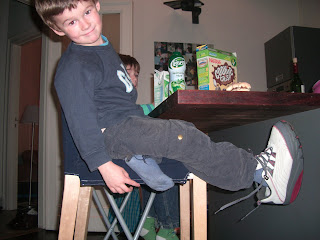 "Oooh yes, I can feel them working" 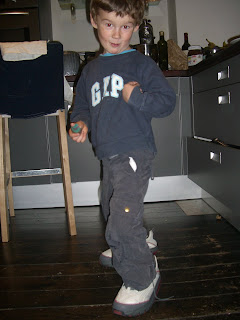 "Much firmer. I can really feel my core muscles engaging" says our tester before rolling over backwards into a nest of icing sugar.

After that, several of us lay on the floor and drank alcohol. One of us received another transgressive tongue kiss ("darling that is NOT how children kiss their mummies" I said. It came out like a dark Joyce Grenfell fantasy, but at least I feel some attempt has been made to establish boundaries.). One of us insists "not darling, baby parrot".

"Bullzeye (Pteranodon): A wise-cracking youngster, his shriek creates ear-splitting sonic waves. Bullzeye has a bad habit of making purchases off the shopping network channels and being an all-round couch potato. He is voiced by Jason Gray-Stanford. "

Noone wins a Belgian prize, although frankly Potty Mummy, he looked more like Buzz Lightyear, I have to agree.

(The more I read about Extreme Dinosaurs, the more hysterical I get.
"Based on a Mattell toy line, Extreme Dinosaurs follows the adventures of 4 anthropomorphic dinosaurs, and their battles with 3 malevolent dromeosaurids whose plan is to generate global warming - making life on earth more habitable for reptiles."
Ha!
Also it features a character called "Porcupine McVells" which is my new official name. )

Baby parrot, hm? Mine insists on "baby dog" or "baby Troodon dinosaur." There was a brief phase of "baby bird" but it didn't last long.

I was going to say 'Angel of the North' but after a while forgot why......

Umm.. a transformer?! Although I can't explain the hat. So the baby parrot thing is obviously why he's going for the french kiss right? Trying to get you to regurgitate something nutricious into his mouth... I shouldn't worry. Me and my brother used to reenact baby polar bears hibernating with my granny under her duvet and we're like soo normal now.

I'd go for Iron Man.
(In case you're wondering who the hell I am, I strayed here from Zoe's blog and been reading for a while.)

You are all wrong. I have updated with the answer!

Hi Juci, I don't mind who you are. I take my validation wherever I can get it.

Pork - What is a troodon dinosaur? Is it extreme? I do hope so.

One of my daughters called herself tractor trailer for quite a while .... she is 15 now and seems to be turning out relatively normal. My brother called himself Grimes Beetlestone for a good year when he was small; sadly, he is still very odd.

Oh, Porcupine! Here in the Deep South, that word is pronounced "porky-pine," which lends an air of authenticity I admire.

My sweet one, you may now be totally losing the plot. This way madness lies.........which is why I do love you and your most delightfull boys so much!! Pass the gin.....

If sea snails taste anything like escargots and are loaded with butter and garlic I say bravo to the malevolent giant squid.

And, no, I had never noticed the puny leg syndrome of the aforementioned men.

Completely Alienne - Your daughter sounds great. What a cool name. Are you reading this Léonie? Your brother, um. Fingers is now insisting on "Rocket the baby parrot".


Which way is the madness Justme? Is there a way out? I feel completely subsumed at the moment.