We deliver the eurospawn to their grandparents. As ever, it is a voyage of discovery. I love my in laws. There is rarely a dull moment, unless they are doing Sudoku. The belle-mère makes me feel good about my thoroughly uninspired cooking. She is that rare thing - a really, really bad French cook. Things either come out of a tin, or they are put in the giant pressure cooker, the mythic "cocotte minute" to be boiled to buggery. The CFO had never seen peas or carrots that were not tinned before he left home. Last time she cooked here, she mistook couscous for sugar, which made for an interestingly crunchy apple tart. We still talk in awe about the giant pie with the charred whole birds heads poking out of the crust, à la four and twenty blackbirds, and how the CFO's uncle toured the table finishing off the discarded skulls by popping them in his mouth and crunching them whole.

She will not travel even as far as Belgium without a collection of vital tinned goods, just in case there is a nuclear war, or the Belgians have forgotten how to speak French, or some other unimaginably terrible thing has happened restricting access to fresh produce. An examination of the cupboard reveals these delights from a recent visit. 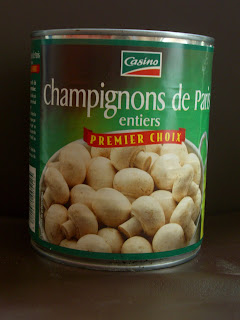 Mmmmm yes please. I love how they look sort of dirty? Even on the supposedly appetising picture on the tin. 'Premier choix' only if the second and third choices are tinned offal I think, or possibly death. Mmmmm. 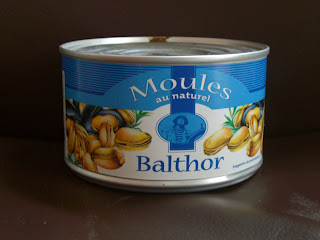 I told her she could get into tremendous trouble importing tinned mussels into a country that prides itself on its moules, but it's obviously some kind of compulsion. Often when I can't sleep at night, the thing that stands between me and blissful oblivion is the thought of these, sitting in their brine coffin, waiting for the right moment to take over the world. Well yes, I could throw them away, but who's to say she isn't right and probably all that health-giving iodine will stand me in good stead in any nuclear catastrophe scenarios to strike Belgium.

The source of Lashes' fascination with the work of the Lord is revealed. Belle-mère has once more been unearthing edifying reading matter in the charity shops of Haute Normandie and shows us A Child's Guide to the Old Testament. "It's a bit disturbing" she muses, flicking from Jacob with a knife at Esau's throat, to Solomon, also wielding a knife to cut the baby in half. Knives seem to feature heavily.

"Erm, why did you choose it?" I ask politely. Belle-mère is a loudly proclaimed agnostic.

"Oh, you know. Their culture générale. I tell them there's no proof."


Belle-mère is amused to discover we really really don't want her to smack the eurospawn. I am mildly appalled to discover she has been doing so thus far, especially having had a rather painful discussion on the subject with Beau-Père last year, where I cried and he felt wounded. She tells us extensively how her mother used to leather her repeatedly and arbitrarily. Belle-mère was brought up on farm in the depths of rural Normandy, it would appear in the mid nineteenth century, although she is barely 60. She makes it sound like something out of Les Misérables, with a forty mile walk barefoot to school, and Calvados in the baby's bottle. Actually, having met her mother I can quite believe it.

"Am I allowed to say 'you deserve a féssée?" she asks, arching an eyebrow. "Or will that 'traumatise' them?"

We flick through photo albums trying to dig out photos of the CFOs youngest brother for his imminent wedding. Belle mere shows us her own wedding photos - she is preternaturally beautiful. Really. With an amazing angular face and luminously fair skin, she is tiny, dainty, divine in her scandalously short wedding dress. Beau-père is beardless and handsome. They are both nineteen, which just seems ridiculous. They look like they have escaped from a Truffaut film. They should use their before and after photos in some kind of anti-sun bathing campaign, I swear.

The photos are fantastic. In the group shots, all belle-mère's family look like those prehistoric men that get unearthed from bogs with weirdly well-preserved skin, or Ramses II unwrapped. Sort of nut coloured and intensely shrivelled. The men have shockingly white foreheads where their flat caps should be. The women look like they could crush the men with one finger.

Belle-mère is wholly unable to distinguish pictures of one child, sex, or generation from another. We spend most of the evening correcting her

"No, that's an unfocused picture of a duck")

We try and send her to bed when she starts mistaking photos of a civic twinning ceremony in Germany with her wedding photos, but in vain.

We run away early the next morning, gleefully if slightly guiltily, as Fingers is starting his morning serenade on the accordion.

Then I make a squirrel out of chicory. 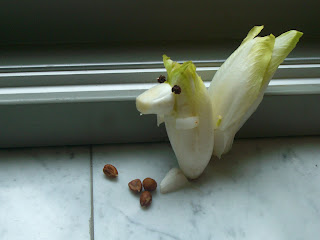 It looks more like a seahorse with vegan tendencies.

Yeah yeah dumdad. Everyone's a critic until they start carving their own vegetables. Let's see the colour of your legumes plse.

Some challenge on the vegetable front! I'm off to sleep now with visions of stargazy blackbird skulls and wings flapping around in my mind. I'm anticipating a rough night.

Blogthatmama
Yeah, I sympathise. I can't sleep with the tinned mussels staring at me. Sorry.

Jaywalker - what a brilliant post! I'm constantly amazed at what the French can put in a tin. In fact is there anything they can't? Keep carving those veggies (no, not vegetarians) VLiF

Hi VliF - um, cheese, perhaps? I don't think I've ever seen tinned cheese. Keep an eye out for me though!

Jaywalker, I'm on a mission now and shall not return until I have found tinned cheese! VLiF