Distraction whilst you whittle

So, between fashioning my post-it and wafer beard, and interrogating the Space Cadette on why exactly she is going back to Catholic camp with demented nun aunt and her brood of waifs and strays (apart from to give me a great deal of cheap laughs and blog material, which is kind of her. Last year people spoke in tongues!), yesterday I took the Eurospawn Working Mother Guilt Shopping.

Working Mother Guilt Shopping. Because a piece of plastic is the way to convey many sentiments Hallmark has not yet captured:

- I am sorry you are at music camp, Lashes, which you plainly find duller than death. I am sorry that I make you sing the nonsensical "Seahorse Blues" song you have learnt repeatedly for my amusement. I am sorry I have enrolled you for piano lessons on Saturdays from September merely to have an hour of peace. It is particularly hypocritical of me to do so given that I hated piano lessons with the heat of a thousand suns.

- I am sorry I am sending you both back to Mamie and Papy this week where you will be dressed in fifty three layers of synthetic polo neck and pleated slacks and required to play dominoes against the world's most competitive woman. If she makes you eat lots of tinned carrots I am extra-specially sorry.

- I am sorry I wait til you are in bed to do lots of stupid craft things, frequently involving your toys. I am especially sorry about Action Man, even if you haven't actually noticed his absence.

- I am sorry that one night this week I was so bored of cooking for you I let your father cook and you had to eat a whisked sweetcorn omlette of his own devising, particularly you, Fingers, since it made you retch (me too!), but he made you try it anyway.

- I am also very sorry Fingers that your place as youngest in our family means that you feel compelled devote all your emotional energy to hiding your stuff.

See? I have a lot to apologise for. So off we went, to the toy shop.

Lashes totally gets this guilt present buying thing. After a swift tour around he alights on something about 30% more expensive than I was planning on getting and makes me agree. I will agree to pretty much anything at this point because the low ceilings, fluorescent strip lighting and ghastly staring dollies of "La Grande Récré" are giving me panic attacks Then, by some sleight of hand he manages to get me to also advance him his pocket money for the next 18 years to get some other piece of tat. Yesterday's crappy plastic dragon in a crappy plastic egg ("made with true skin" said Lashes, in an attempt to reassure me I was getting my money's worth) was a masterpiece, since in the 12 hours or so since he got it, I have had to try to reattach its stupid bastard head about thirty million times and its tail about as often. A present requiring effort as well as expenditure! Well played sir.


Fingers is deeply wedded to domestic appliances and having found the absolute über washing machine ("It really washes" he said in awed tones, stroking the box reverently), could not imagine getting anything else. Sadly the washing machine was approximately a cubic metre of plastic, and thus hard to get onto the 92 tram with its special anti-obesity doors. After about an hour trying to prise him away from the dream machine with other stuff, I felt we might never escape. Until we spotted this: 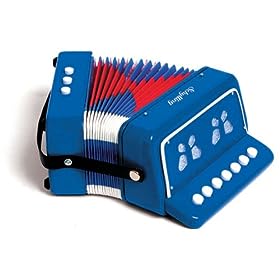 "That." he said, the washing machine instantly forgotten. "I want THAT". I gleefully agreed and all three of us unprecedentedly united in total satisfaction, we made our escape. My son has an accordion! We got it straight out of the box for an experimental squeeze. Scree scree delicious torture went the accordion, surprisingly loudly. Whine, screech, whine. Bliss! Shoppers looked around, alarmed, for the sadistic busker.


Since then, my life has been resounding to the inimitable tones of the accordion. I feel like I am in a low rent made for tv drama set in Monmartre. Scored by Arvo Pärt. On ketamine.

"Do you know what I will do chaque matin when I wake up at Mamie and Papy's?" said Fingers this morning, hiding the accordion lovingly in a closed shoe box under a duvet in the hall cupboard. "I will play tunes on my accordion!".

Oh, Lord! Note to self: MUST get toy accordian and arrange visit for children to my parents' house. Brilliant.

your low-rent Montmartre tv serious absolutely made me bark with laughter. And I don't even know who Arvo Part is.

I am so grateful for all the sentiment my parents tried to buy me. To my mind, presents are much better than Hallmark cards.

I think that you buy presents that make loud and potentially annoying noises makes you mother of the year.

p.s. just the thought of a creamed corn omelette made me retch a little. Oh my god I can almost smell it. It smells like morning sickness.

Pretty Jane - yeah, it's a winner. The present that keeps on giving. I recommend.

Curlywurlyfi - Keep it that way sweetest, suffice to say: estonian. atonal. composer. Are you getting a chill down your spine? I certainly am.

Woozle - soon I am going to post about other tinned goods my MIL favours. Be afraid, be very afraid.

Peevish - mhahaha (that's my melodrama villain laugh there). The egg/corn creation was just as and as you imagine. My Kitchen Aid mixer was weeping with shame at its involuntary involvement.

Would you disdain me if I told you I rather like Arvo Pärt? At least, I like Spiegel im Spiegel, especially as it was used in the movie version of Wit, starring Emma Thompson. I did have to look up "ketamine", though. It's described as a "receptor antagonist", which sounds like a fighting high to me.

For years, I searched for the perfect revenge gift to compensate for the maddening beep-beep toys my sister insisted on sending my daughters. An accordian never occurred to me. You're a genius.

Persephone,
Of course I wouldn't disdain you. I would be rather overawed, actually. I think ideally the accordian should be accessorised with a stick on moustache.