Things of no consequence

I am tagged! Wow. Oh, and also, internet, I am still alive.

So, the idea is, you answer these questions and then make some other people answer them. And tell them about it in their comments. Right? Right. Ok.

1. Where was I 10 years ago?
Ah, at law skule. Friends, do not go to law school. It is full of lawyers. Also, the aim of the exercise is to get you used to the mind-numbing tedium of being a lawyer, day in day out. There is one advantage however, and that is that they attempt to cram so many would-be lawyers in there, that they could only accommodate us for about an hour of lessons a day. I spent the rest of my time wandering around London and continuing to fall in love with it. I also met BMF and we were united in our loathing of our own lack of imagination in becoming lawyers..

We were living in a flat just north of Oxford Street, with prostitutes on the first floor and L Ron Hubbards ex-nanny just down stairs. I discovered all sorts of treasures like RIBA on Portland Place for its secret café and handsome architects, Bayswater ice rink for falling over, the Porchester baths for cheap and fantastic massage, Lina's Stores, Berwick Street market, the Wallace Collection (pre-refurb, when it still had the most magnificent Victorian plumbing), the Curzon cinema in Shepherds Market, all the Bloomsbury squares. I learned to rollerblade ineptly in Hyde Park and went to Barcelona to eat custard with a law school friend. The CFO was working in Cricklewood, the poor thing, and permanently bewildered. It was half magical, and half rather boring. An odd hiatus from real life.

2. What is on my to do list today?
The same thing as yesterday, day before, three weeks ago. I am an eternal procrastinator. Most weeks I cannot even open the post. It just sits reproachfully. But I MUST book train ticket to see the Space Cadette graduate - with a first! Yay Space Cadette! Oh and another train ticket to go see Jack Johnson in Hyde Park next week. If I try to add anything else to the list I will need a little lie down to recover, so I am stopping here.


3. What would I do if I was a billionaire

I want a giant Galapagos tortoise and a baby elephant for starters. If the baby elephant is not an orphan, I suppose it ought to bring its mother too. I am not entirely heartless. The tortoise must be trained to bring me small cakes when I snap my fingers.

Then I want a little light surgery. Laser eyes, and some lipo. And some new eyelashes. At a clinic in Switzerland with excellent food and celebrities to stare at from behind my bandages.

Next I will pay someone to kidnap David Sedaris and I will keep him to amuse me and be my friend.

I will also be buying art. I would like a lovely decorative Vuillard, preferably an interior. One of those rainy Pissarro Paris street scenes where he gets the quality of light so absolutely right. Something restrained but beautiful by Ben Nicholson. A Matisse litho that I once saw but of course couldn't afford of a girl looking at a goldfish in a bowl.

Clearly, there must be shoes. Maybe Christian Louboutin could join David Sedaris on my staff of kidnap victims.

I will stop now, but I could go on. You get the picture. Lots of stuff. I am grasping and materialistic like that.

5. I can't do the job one Léonie did, because eurodroning has occupied me for too long, so I will do the snacks one Marianne did.

5 snacks I like
Cake, especially fondant fancies from Bettys.
Cheap chocolate - Galaxy Caramel is nice, or mini Snickers. It has to stick your palate to your tongue. This comes from being born and raised in the shadow of the Rowntrees (now Nestlé, booo) factory.
Café tandem - this is an invention of the ice cream shop up the road. It is a cup split in half, and half of it has espresso coffee in, the other half hazelnut mousse. Of course, this being Belgium, you also get a biscuit on the side.
These Belgian biscuits: 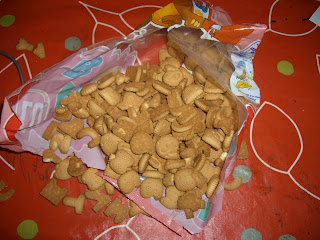 they have nothing whatsoever to recommend them except their smallness, but for some reason are irresistible. I suppose they probably have crack cocaine in. That giant bag in the picture? Gone now.
Deep fried crispy children.

I want David Sedaris too!
And I also suffer from phone phobia.

Hi there I heart,
I suppose we could share him. But you know us billionaires, notoriously temperamental and bad at sharing. Maybe we can use some of our billions to clone him?

Jaywalker, thank you for thinking of me. Not sure I can do the meme, but I have added you to the rollcall over at Red, White and Bleu.

You did it before I even asked! Thank you. I can't believe I forgot to put baby elephant on my list of stuff to buy! Dammit.

I also suffer from phone phobia. I would emply someone to make phonecalls for me.

Hmm I am sensing a link between blogging and phone phobia. I may be moved to draw a graph.
Léonie, I will send the baby elephant over in my Lear jet to visit if you wish.

I have to say I completely and utterly agree on your art selections - they really made me smile with genuine art-happiness! Love Ben Nicholson. I wouldn't mind a William Nicholson shiny one too. And I love RIBA, love it.

Marianne - ooooh I'm so glad you like RIBA too! All those lovely architects in their adventurous spectacles. Even better than barristers in some ways.
When we are both billionaires we can stroll around Cork Street purchasing everything that takes our fancy. And fight at auctions with oligarchs. Hee!

WHO SAYS I DO NOT? ALSO, HOW DID YOU KNOW I AM ALSO KNOWN AS MINKY? THIS IS VERY INTERESTING. SADLY HOWEVER I AM CAUGHT IN A WARP IN WHICH I CAN ONLY WRITE IN CAPITAL LETTERS.

I WILL TURN MY ATTENTION TO YOUR 'TAG' AT SOME POINT. FIRST, I MUST EAT A CAKE.

OK MINKY SAVE SOME FOR ME
all monkeys are called minky aren't they. also I have magical powers.
I think I didn't want to ask because I am slightly frightened of you. In an awe-struck, respectful way.

Thank you so much for the tag. I need writing inspiration!!
L Ron Hubbard's nanny? Hilarious!!
And, my grandfather sailed to the Galapagos islands and was forever talking about the turtles.

Some tech-free celebs are recovering tech addicts. Tyra Banks told New York Times Magazine that her BlackBerry habit caused her physical pain. She has since gone low-tech and jots her thoughts in a notebook.
Technophobia, of course, extends far beyond cell phones.
Christopher Walken and David Sedaris don’t use cell phones or e-mail. Simon Cowell says he doesn’t know how to work a computer.
more