In which I am invited to Paris Colleague's housewarming

Today I received a long and convoluted email from PC, inviting me to her housewarming in a glam part of Paris where bouffant haired philosophers outnumber viciously psychotic old ladies (in itself a rarity).

The other addressees (hundreds! I can probably muster about 8 friends and that would include family members and clinically insane people met in therapy) had exotic names and email addresses, like vogue.com and culture.gov and lvmh.fr . There was a light smattering of other Eurozombies, though I assume they were French ones, with good hair.

The message, which MBF described as "the lewdest housewarming invitation I have ever seen" started with a gratuitous anecdote about persuading a team of builders to move her claw foot bath by wearing mini shorts and pretending to drop and pick things up. There was a lot of talk of filling the bath with Veuve and some mention of dates and times, but then came the killer phrase.


"Dress code: Something you look good bending over in".


Well. Internet. I am somewhat at a loss. Clearly mere clothes will not cut it. My initial thought was one of those individual one person saunas that jockeys use. Comme ceci:

And by the way, this picture? Making me laugh like fool.

What inspiration does Belgium offer (it has a heavy responsibility, since I hold the entire country responsible for the state of my arse)? 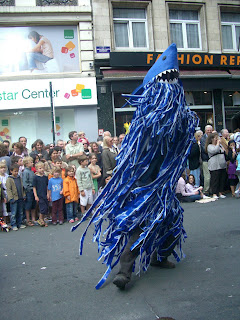 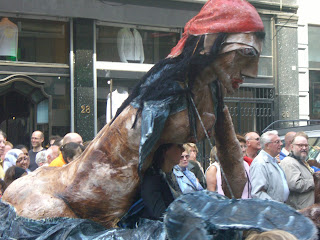 (yes, I have 130 photos of the damn parade, you can expect to see them reused at every tenuous opportunity)

I am open to suggestions. Possibly I will showcase some outfits tomorrow. I may even have to convene an emergency session of Belgian Fashion Clinic! Watch this space. If you dare.
Posted by Waffle at 20:26

I vote for the single-person sauna. Tres chic!

pencil skirt - everyone looks fabulous in a good one and if you team with stockings with seams and heels you cannot go wrong....

I heart - Possibly hard to source the sauna in time, and I wonder about train travel to Paris with it. Otherwise, indeed. Both chic and flattering.

Emily - your suggestion is clever, imaginative and sensible. Sadly I am none of those things so more likely to go with some heinous Belge-tastic get up...

Pig in the Kitchen said...

the party sounds too terrifying. I wouldn't go.

but if you do, may i suggest a leather skirt and vicious heels?

the leather in itself will suggest lewd and sensual things to - well - everyone, and the heels will reinforce it all. You probably won't even need to bend over.

I am working on getting you a "grandmother jacket."

And, I agree with the pig in the kitchen, I would not go to that party. Too scary.

Pig and Woozle, Full disclosure here: I have NO intention of going to this party. I sort of feel I should for blogging potential, but cannot face the hours of sitting in the corner feeling like a tool while nubile Euros gyrate and wave their lovely hair.

Unless I had a grandmother jacket. Then I would. I could mesmerise them all with my lamé palm trees! And they would all think it was 'deuxième degré' (ironic). But it would not be. Hmmm...

can i shame myself by asking what a grandmother jacket is/looks like please?

Emily - aha, you need to head over to La Belette Rouge to find out! Not for the faint-hearted though (the jacket, not the weasel)