And today, we have another tortoise. And two more fish. If the CFO is having a mid-life crisis, it's the weirdest one I've ever encountered. I should be glad he hasn't bought a Porsche or run away with a nineteen year old I suppose. Or taken to wearing lots of leather. That would be the worst, wouldn't it? And all too likely in Belgium.


I think really he is trying to fill the Julius shaped hole in our lives, but nothing ever will. He can buy reptile after reptile until we can rival Antwerp Zoo but that empty feeling is not going to go away. Julius was our first tortoise. He was awkward, stubborn, undemonstrative (not in itself astonishing in a tortoise) and borderline malevolent. Here he is. I could not find the picture of him very deliberately pooing on my plate, sadly. But here he is, off to defecate on someone's Christmas present, so also fairly typical. 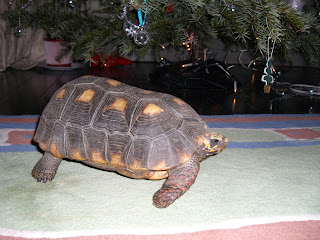 He was smelly, cantakerous, aggressive; he terrified builders and bored the children (his only party trick was eating cashew nuts whole), but God we really really loved him. He would lumber up behind you when you least expected him and try to attack your leg. Or mate with your shoes. And despite his great size, he would frequently get lost and we would track him down a couple of days later in a cupboard, quite by chance whilst looking for sellotape. Above all, he was oddly devoted to the CFO and would sit under his chair, chasing away (slowly and unsuccessfully) anyone who tried to approach.

Even in death, Julius was embarassing and indelicate and rather phenomenal. Those of a delicate disposition should stop reading now. Really. We went away for the weekend and when we came back he had got an enormously swollen penis (this is going to do wonders for my stats isn't it?!! Vast throbbing tortoise members! Here! Live in colour!) while we were away. Like, huge. Grotesquely so. We came back to this freakshow penis attached to a grumpy but otherwise unchanged tortoise. It was extraordinarily disturbing, I can tell you. And repulsive. I had to take a sleeping pill that night, and the nightmares, Jesus! It was a miracle I ever had sex again.

So. Next stop, a ground-breaking penisectomy (a Belgian first! the vet is writing a paper on it. I have made that word up, however.), which he survived despite the vet giving him pretty poor odds. And then, for weeks, the CFO and I had to take it in turns to spend 20 minutes morning and night massaging the, ahem, 'stump' with iodine solution. And believe me when I tell you that twenty minutes massaging the remains of a tortoise penis while the pissed off upside down tortoise fights you with every ounce of his strength makes you question your life choices quite profoundly.

He was never quite the same though (well, you wouldn't be, would you), and succumbed to an infection a month or so later. We were devastated and about €800 down in vets fees. The house felt empty without the ever present risk of stepping in tortoise faeces.

Too much information, no? I'm sorry. But I did warn you.

So now my life is full of these small, characterless ersatz Juliuses. Although I couldn't tell you where most of them are at any given moment. Buried in the mud? Kidnapped by an ambitious cat? It's just one more source of constant nagging anxiety, and I can generate plenty of that all by myself without small reptiles. I shove a plate full of endive in the garden and hope for the best. Maybe they are at least preparing me for the boys' teenage years. I am sure that this combination of foreboding, impotence and inadequacy will be staying with me for a while to come.

I still miss the old bastard though. The slow click clicking of his nails on the kitchen floor. The sound of his shell scraping against the door frame as he clambered into the house. The hissing. Dammit.

He is pretty damn gorgeous, though - I would have massaged his stump if he'd asked. I'm nice like that.

Jaywalker: This is the second time I have ever read aloud a blog post to my He-weasel. And, the other time was your tram post. You, are unbelievably hilarious. I never imagined I could laugh so hard at a story about a dead tortoise.

I am sorry for your loss of Julius. But, I can not thank you enough for sharing the story with us. I have read a lot of blogs. I have never read a blog post funnier than this.

Mya - he is, isn't he? And he had sort of red spots on his paws that looked like he was wearing Chanel 'Pirate' polish.
I wish you had been around to share stump massaging duties...

Belette - you have made my day chérie, what a lovely lovely thing to say! You are an angel. I hope He-woozle is not having disturbing nightmares as a result though!

although hilarious post! :) you have made my smothered-in-a-cold day much happier! thank you x

Bwah hahahahahaha!
Like LBR, I read this one aloud to my husband and we both laughed uproariously.