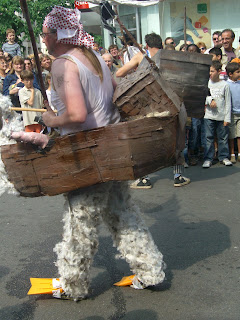 - Lashes, darling, it's wonderful isn't it, aren't you enjoying yourself?

Oh lord, words are just inadequate to describe the Zinneke parade. It just makes me want to show you wordless photo after photo of how bonkers and wonderful this place is. But even selecting photos is causing me agonies, I want to show you all 130 of them (don't worry, I won't, I have a very low boredom threshold and uploading photos makes me grind my teeth). They have titles like 'duck foot pirate', 'shark bin lady', 'petrol thing', 'pointy head beard man', 'fire helmet heart bike'. And I don't even have pictures of the giant naked showering effigies made out of a million pairs of American tan tights. To my great sadness.

This one Violet's boyfriend aptly described as 'Belgian Amy Winehouse'. He was very game about the whole thing and totally got into the spirit, describing one float as 'giant Kendal mint cake' and insisting that a swan was a polar bear. I think he may be spiritually Belgian. Violet however is in disgrace, the slut, for trying to seduce the CFO with dirty talk of electricity meters. 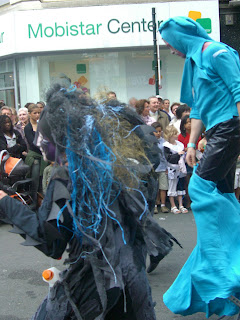 These Mars Attacks style people with shower cap brains were among my favourites. Violet said that several hours later they were propping up a bar on the Grand Place still in full head gear. Respect. 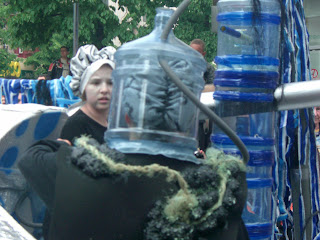 This was one of the marshalls. No, I don't remotely understand either, but I thought she wore it well. 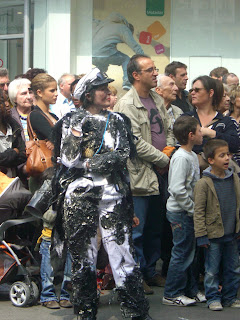 The crowd around us was equally hysterical, particularly as there was no crowd control whatsoever. We did a lot of British tutting about this. There were quite a lot of cross old ladies trying to do their shopping who found the whole thing a massive irritation and weren't averse to poking participants with their walking sticks, totally bemused tourists, a group of mildly autistic adults who must have found the whole thing massively overstimulating, and an adult Spiderman who had nothing whatsoever to do with the parade.

Most intriguing was the operatic menage à trois going on next to us with a very normal looking couple in their 60s and a crazed hard-faced blue eyeshadowed blonde who rocked up out of nowhere. Who had apparently seduced the man in the fishmongers where they both worked. At one point I thought we might have to step in and split it up. By the end of the day my chest hurt from laughing.

Oh, go on, just one more.. Ah! So hard to choose! I'm going to go with the herring in the ice cream cone, but it breaks my heart... 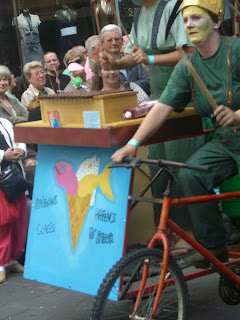 Is there a theme to the parade? Or, is just any weirdness acceptable? Do Belgians usually embrace their weirdness like this or is it just on special days? Too bad you can't put all 130 pictures up. Howeever, if you did I would have even more questions for you.

The theme was supposedly 'water' but it was very liberally interpreted in habitual Belgian style. I was particularly stumped by the men in the red boiler suits with flaming hats and bicycles. The many and various people in women's undergarments was also a little difficult to tie in to the watery theme...

I think Belgians have weirdness hardwired into their DNA, this is only one of the innumerable weird happenings in any given Belgian weekend. I really envy their heritage. The French have civil disobedience, Belgians have surrealism, and all I get is the ability to form a polite queue any and everywhere...

I applaud you for having the courage to step outside your front-door. I'm finding your insights into Belgian life, a bit ...alarming.

Watch out Mya, I haven't even told you about the hairdressers yet!